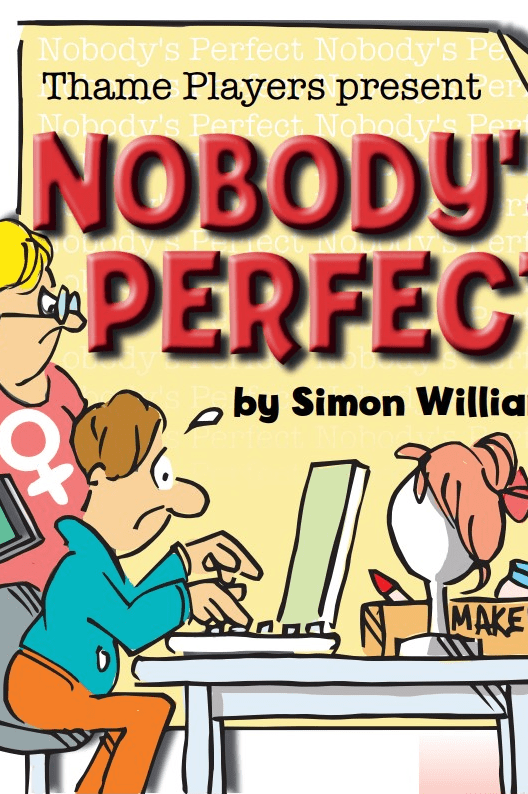 A THAME PLAYERS PRODUCTION. 'Love Is All Around' is a feminist publishing house where Harriet Copeland is running a competition to find new romantic fiction; their motto is 'For Women By Women'. To avoid this gender bias, Leonard Loftus is forced to submit his novel under a female pseudonym. So when "Myrtle Banbury" wins the first prize, Leonard begins to have a major problem. He is a bashful statistician lumbered with a spectacular alter ego. With domestic complications from his wayward daughter Dee Dee and Gus, his rascally old father, Leonard tries frantically to keep up the charade of Myrtle. His problems are made worse when he falls hopelessly in love with Harriet. He is a worried man in the guise of a carefree woman. The happy ending is not going to be easy. In high heels and lipstick our hero is caught in a hilarious dilemma of cross-dressing and cross-purposes.
Oh what a tangled web we weave, across The UK, Australia and all over Europe, Nobody's Perfect has been acclaimed as a classic feel good romantic comedy. Now adapted for the US audience it has the fertile tradition of Some Like It Hot, Tootsie, and Mrs. Doubtfire. This is a play that offers belly laughs galore - four irresistibly loveable characters locked into a hilarious plot. The final scene has been described as a comic masterpiece.
Tickets cost £8 on Tuesday and Wednesday and £10 (concessions £9) on Thursday to Saturday
This amateur production is presented by arrangement with Concord Theatricals Ltd on behalf of Samuel French Ltd. www.concordtheatricals.co.uk

Streaming tickets are not purchased per seat as in traditional theatre, but rather per stream, or per device. You can only purchase one stream per email address, as your access to the performance will be tied to that address. For more information about streamed events please read our FAQ.